Nebraska is home to diverse landscapes, with wide-open prairies, towering dunes, winding rivers, and some extremely dramatic rock formations, all which make for some great outdoor adventures.

One of the best ways to see the landscape is by hiking it. Whether you like paved trails, sloshing through streams, or strenuous uphill treks, with more than 80 different trails, you’ll find a suitable path for your feet. The Cowboy Trail is a 195-mile rail-to-trail conversion that is popular with hikers. Originally a railroad track, it has been converted for human traffic, crossing 221 bridges along its mostly flat path. Also easy on the feet are Fontenelle Forest Trails, Schramm Park National Recreation Trail and Tranquility Trail. For a little more effort, you can trek Indian Cave Trail in the southeast corner of the state or head to Panorama Point Trail Loop near Kimball in the west, which will take you the highest point in Nebraska. You’ll also find extensive trails in all eight state parks.

If you’re up for water adventure, Nebraska is a great place to float your boat. Be it a canoe, kayak, fishing boat, or even an inner tube, there is a body of water that will fit the bill. Most of Nebraska’s rivers are Class I, slow moving with some ripples, with the exception of Niobrara River, which goes up to Class IV. So you’ll find that canoeing, tubing and kayaking with children is fairly safe if you use all safety precautions.

If you prefer a lake setting, for boating activities, fishing, windsurfing, even water skiing, you’ll find a paradise in all corners of the state. Some of the more notable lakes for water sports are Branched Oak Lake near Malcolm, the 20 sandpit lakes in Fremont, Harry Strunk Lake in Cambridge, Lake Maloney in North Platte, and Lake McConaughy near Ogallala. There are also several reservoirs: Lewis and Clark Reservoir near Crofton, Calamus Reservoir near Burwell, Harlan County Reservoir at Alma and Merritt Reservoir is in the Sandhills region of Cherry County. No shortage of water in Nebraska!

A more sedate activity, bird watching, has become big business in Nebraska, primarily due to the sandhill crane migration that takes place from February to April each year. Half a million birds use the Platte River as a resting place, and viewing areas have been set up along Interstate 80 from Kearney to Grand Island. This is one of Earth’s last great migrations, and even if you are not a regular bird enthusiast, it’s a spectacular representation of nature that should not be missed.

One of the more unusual outdoor attractions will take you back millions of years, along what is known as the Fossil Freeway running through the state. Agate Fossil Beds National Monument is home to bones estimated at 19 million years old. Fossils from digs can be found at the visitor center, and you can hike trails into the nearby quarries. Ashfall Fossil Beds State Historical Site is an active dig site in Antelope County that now has a massive visitor center (Hubbard Rhino Barn) where you can see what paleontologists have discovered (including camels and rhinos, oh my…). Take a walk on one of the trails and you might get lucky and find workers excavating a saber-tooth cat.

Along these same lines is the fascinating geology of the state. Nebraska offers a glimpse of the honeycombed caverns at the Happy Jack Peak and Chalk Mine, the chance to wander the moonscape at Toadstool Geological Park, or a visit to Chimney Rock, a 300-foot spire that rises high above the North Platte River, a landmark for pioneers crossing the California, Mormon, and Oregon trails. Courthouse and Jail Rocks, located in Scotts Bluff National Monument, are also along the Oregon Trail. These rock formations rise out of the plains making them easily sighted by weary travelers.

Last but not least are the many state parks that stretch from the panhandle across the state’s open plains. Outdoor adventures abound and include camping, water recreation, hiking, fishing and horseback riding. You’ll even find golf courses, ice rinks and the opportunity to jump in a stock tank and float down a river!

Wide-open spaces afford the opportunity for so many wonderful outdoor activities in the state of Nebraska. Visitors and residents alike delight in the abundance of opportunities and the places yet unexplored. 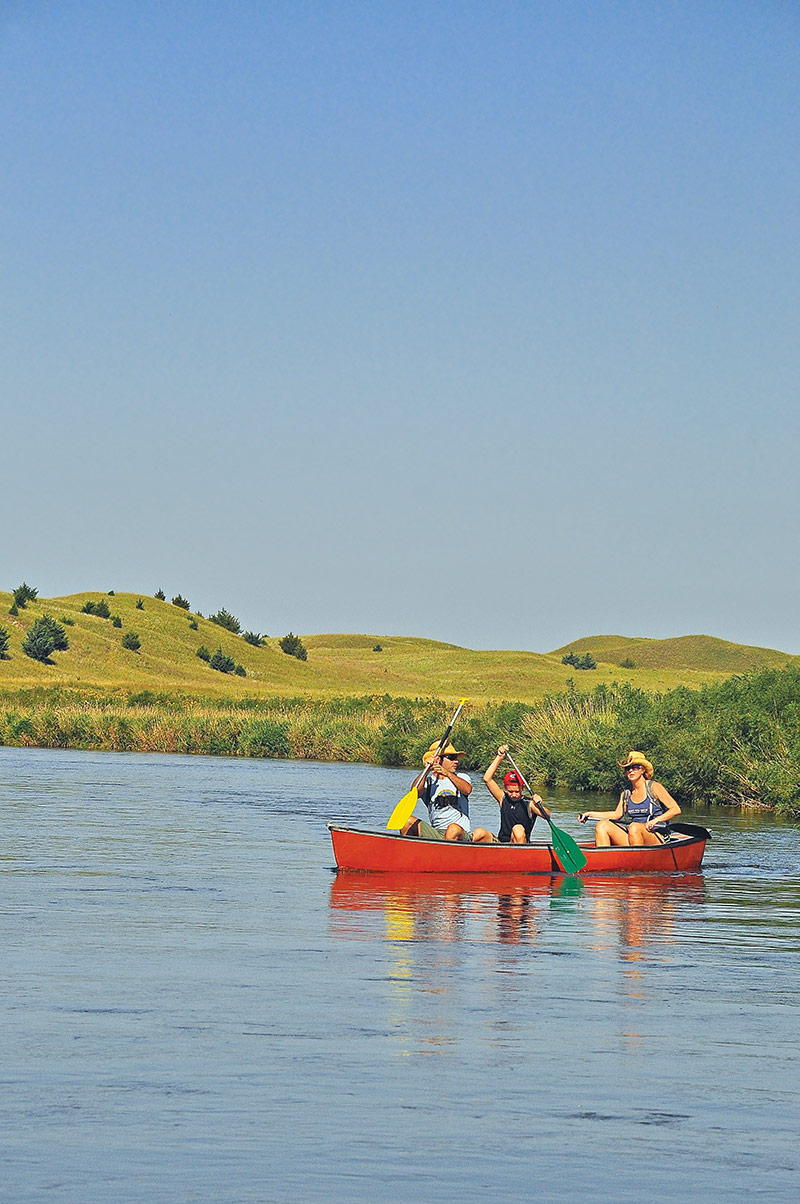